I have long been fascinated by my maternal ancestors, Henry TUCK and his Irish bride, Catherine FALVEY. The family legend had it that Henry was born on the Isle of Skye in 1810, and my family fully embraced the Scottish connection. One of my uncles and a cousin even bought kilts and learned the bagpipes, joining a local pipe band. Another cousin named her daughter Syke. 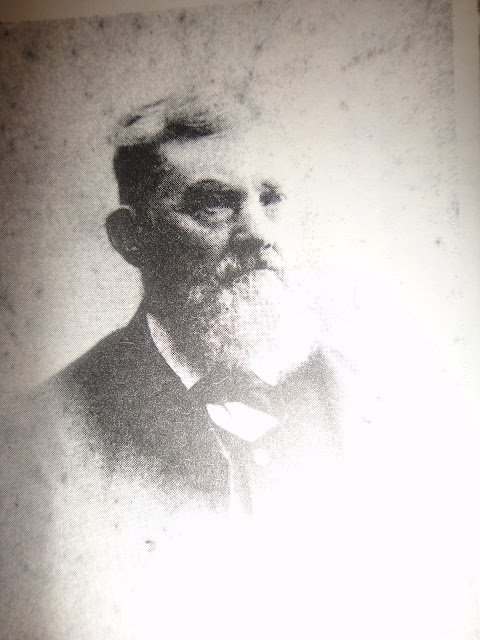 This legend is evident on Henry's death certificate (1) and a biography written by his grandson, Samuel, published in 1963. It starts "My Grandfather, Henry Tuck, was born on the Isle of Skye in the County of Inverness in 1810, just five years before Waterloo." (2)


The genealogist in me wanted to find some proof of where Henry was from. Thinking that Skye was the obvious place to start I contacted SkyeRoots, who searched their records and came up with nothing, informing me that Tuck isn't a Skye name.

Looking at a heat map of the Tuck surname in the UK I saw that the county of Norfolk has the highest number of people with this surname in the 1841 UK Census. Norfolk looked like the place to resume my search.

I found a baptism record on FamilySearch in Blofield, Norfolk, that looked promising. All of this particular Henry's siblings names were also the names my Henry gave his children. His mother has a relatively unusual first name, Christian. My Henry didn't call any of his children Christian, so the chance that this was "my" Henry was still just a chance. 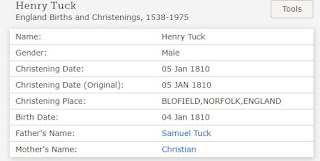 To find out more about this Tuck family I joined the Norfolk Family History Society so I could view their user-submitted trees, as well as access their large library of records. There were a number of Tuck family branches, and I chose the one that included my potential Henry.

This Henry matched the baptism I found on FamilySearch, and also this Henry could not be found on the 1841 UK Census, or dying before then in the UK, leading me to believe that he could be the man who sailed away to the other side of the world. I created a tree for this Henry, paying attention to the other surnames that were part of his ancestral family. I had a feeling this was the right guy, but how could I prove that this was the same Henry Tuck who came to Van Diemen's Land in 1830?

Enter the brave new world of DNA testing. I am very fortunate to have both of my parents still living, and I had tested them sometime before with Ancestry. I looked at my mother's DNA matches and searched for the most unusual surname that I could find in Henry's tree, SKEDGE. Unlike with the surname Smith, I knew there wouldn't be many Skedge's out there. I had two men come up as a match with the Skedge surname in common, both in Canada. I reached out and luckily they both replied. Alan is descended from Henry's grandmother's sister, Ann Skedge (b.1762). She married James NORTON and they emigrated to Canada, producing a large number of descendants still living there today. Alan has done extensive work on his family tree, which is how I found Ann and her sister Elizabeth. Our match is only 7 centimorgans, which is down the lower end of results. The other match was with my other Canadian relative, Steve. We share 15 centimorgans, which is an even closer match. He is also descended from the Skedge-Norton marriage. He knew of Alan, but they hadn't corresponded, so I was thrilled to be able to introduce them to each other via email.


Without DNA I would not have been able to prove that this relationship existed. I would have been left wondering forever. Using DNA in this way has helped me break down a 20-year brick wall.

Additional y-DNA testing of a direct male line descendant of Henry has revealed the Tuck name going back many hundreds of years to matches in Norway. The name Tuck being of Old Norse origins must be right after all! Thanks to DNA I have found Henry's family of origin and made friends with distant relatives interstate and across the oceans.

If you would like to learn more about how DNA can break down your brick walls, come along to the DNA Down Under event, a multi-city event featuring the best speakers in the field of DNA and genealogy, Blaine Bettinger, Louise Coakley, Kerry Farmer, Michelle Patient, Helen Smith, Fiona Brooker, and Mike Murray. They will be visiting Brisbane, Perth, Adelaide, Melbourne and Canberra for a one-day event in each city, and a three-day extravaganza in Sydney from 29-31 August 2019. 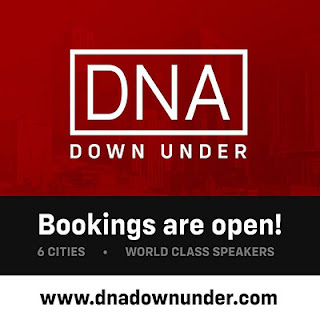 I am honoured to be an Ambassador for this event. Come and see how learning more about DNA can take your genealogical research to the next level.