DNA Down Under Ambassadors Related!

My ears were burning when my distant cousin, Marilyn, wrote this article for her local family history society journal.


The question is often asked - how can DNA assist me in my family history research? A great opportunity to find out is coming to Canberra with the DNA Downunder Roadshow in August this year.

Recently in preparation for the conference, which will be in Canberra 26 August 2019, I applied and was successful, in being appointed a DNA Ambassador to help promote what is going to be a fantastic, not to be missed event. When reviewing the list of ambassadors, I recognised a name – Janelle Collins. Could this be the same Janelle who shares an ancestor with me?  After some emails – yes! An interest in genealogy and family history must run in families.

I have never met Janelle and don’t even know where she lives but we have been in contact sporadically over the last three years after discovering through our research we shared the name GABRIEL in our family trees. But Janelle had a strange story. Her grandfather, George Millard KERVILLE was apparently taken aside at a funeral and advised that the father he and his siblings had known all their life was not their biological father. Their father was actually the long-term boarder in the home, Leo Brenell Gabriel. While this knowledge was kept secret in the family, it was true that Leo Gabriel had married their mother in 1939 after the death of her husband George Kerville.
After extra traditional research we found that Leo Gabriel, born 1889 in Prahran, Victoria, Australia, was the son of James Gabriel and Minnie Louise TURNER.  I had a James Gabriel in my tree also, as the brother of my great grandfather, Thomas Gabriel, born 1862, Bandon, Cork, Ireland. James’ baptism was found in the Ireland, Catholic Parish Registers, 1655-1915, father Thomas Gabriel; mother Mary SULLIVAN, baptised 1 Feb 1860 Bandon, Cork, Ireland.

Sometime after this DNA entered the story. Unbeknownst to each other Janelle and I had undertaken DNA Autosomal tests and there we were on each other’s lists of DNA matches, sharing centimorgans. Since then Janelle has tested her mother, her children and a first cousin. I have tested my son and - yes, we all match each other within the correct range of centimorgans.  DNA has established Janelle’s family story was true and confirmed our traditional family research. Through DNA we have verified I am a third cousin to Janelle’s mother and a third cousin once removed to Janelle.

We discovered brothers James and Thomas Gabriel both joined the Merchant Navy at an early age. James served for thirteen years and then emigrated to Melbourne, where he continued to be a mariner. Thomas on the other hand, jumped ship in Sydney and made his way to Campbelltown in 1881, where he kept away from the sea and became a dairy farmer and labourer. Despite the years of sailing the seas and living in different parts of Australia, James and Thomas must have known each other as Thomas named his daughter Minnie Louise, the name of James’ wife.

Similar to Janelle appearing in my DNA matches unexpectedly now her name has once again appeared in the list of DNA Down Under ambassadors. We are not only excited about meeting each other but also at attending what is going to be an amazing experience. The conference keynote speaker is the world renown genetic genealogist, Blaine Bettinger, author of what almost could be called the bible on DNA for family research, “The Family Tree Guide to DNA Testing and Genetic Genealogy”. Joining Blaine will be other well-known and knowledgeable genetic genealogists from Australia and New Zealand such as Michelle Patient, Kerry Farmer and Louise Coakley, to name a few.
The conference is in Canberra 26 August 2019 and the all different 3-day Sydney conference is 29-31 August 2019. Go to www.dnadownunder.com for the full program and speakers. 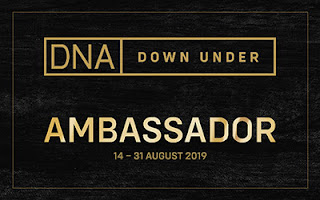 What a wonderful coincidence! Being able to confirm years of paper research by finding a DNA match is fantastic. I'm so looking forward to DNA Down Under in August to be able to meet Marilyn, and catch up with many genealogy friends that I've made over the years. The multi-city event has different talks at each location, so there will be no doubling-up of information for those who can make it to multiple places. Come and join me at the Sydney event, and listen to DNA guru, Blaine Bettinger, teach you how best to use DNA to further your family history research.
Posted by Janelle Collins at 21:22